With heavy hearts, we announce the death of our mother, Doris Louise Malmo (née Radke) on Monday, July 25th, 2022 at Olds Hospital.

Doris was born in Bashaw, Alberta to August and Lydia Radke. She grew up on a farm near Bashaw with her two brothers, Norman and John.

She met the love of her life, Roy Malmo in New Norway, Alberta. They married on September 12th, 1948 and celebrated their 72nd wedding anniversary in 2020.

Roy and Doris moved from New Norway to Olds, Alberta in 1965. There they created a loving home on a street full of families and kids. Mom gardened, cooked, baked, sewed, volunteered, and worked as a florist with Central Alberta Florists. Her volunteer activities included over fifty years of service with both St Paul’s Church Women and the Olds Hospital Auxiliary.

Mom was predeceased by her parents, Lydia and August, her two brothers John and Norman and their wives, Lois and Doris, her husband Roy, and sixteen in-laws from the Malmo side.

The funeral live stream will be available at the following link:

Irene was born April 21, 1935 in Didsbury, AB to Bessie and Thomas Hunt . She was the youngest of 5 children, 1 brother and 3 sisters.

Irene married Raymond A Scheunert December 30, 1952 in Trochu AB where they raised their 5 children. Irene was predeceased by her husband, Raymond on July 23, 1990 and their son Gerald on August 23, 2009.

Irene retired from North Western Utilities and moved to Olds AB in 1993 to be closer to family. She was an avid reader and gardener. She loved to sew and travel the back roads of Alberta. Irene was involved in her community through St Paul’s Lutheran Church, Kiwanis Music Festival, Special Victims Services and the Olds Legion.

Most of all, Irene loved to watch her grandchildren in hockey, baseball, judo, dance, gymnastics and music.

Funeral Services will be held at St Paul’s Lutheran Church in Olds at 2pm on Monday, August 1, 2022 with Pastor Olav Traa officiating.

Adam passed peacefully at home in Didsbury, at the age of 95. Adam was born on September 12, 1924 in Elbourne, Saskatchewan to Friedrich and Maria (Hodel) Wittal, the sixth of fourteen children. 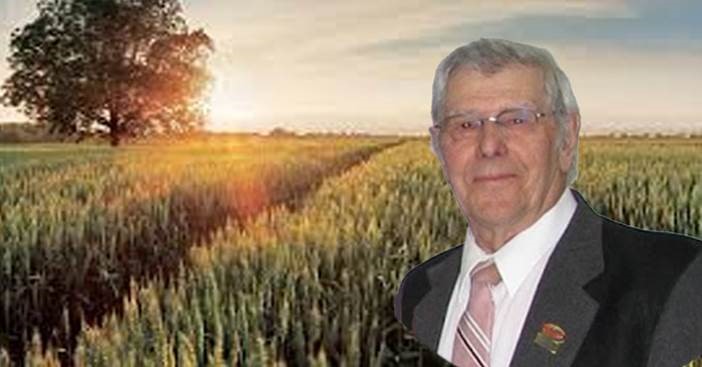 Adam is survived by his loving wife of 62 years, Linda; and their four sons, Randy (Jan) of Coaldale, AB, Brian (Kim) of Didsbury, AB, Greg (Lori) of Castlegar, BC, Shawn (Dayna) of Ponoka, AB; and their daughter, Lawana (Steph) of Killaloe, ON; as well as eleven grandchildren, and ten great grandchildren.  He is also survived by one brother, Philip of Regina; two sisters, Annie Schmidt of Southey, SK and Edie Hastie of Cathedral City, CA; and sister-in-law, Penny Wittal of Regina; as well as many nieces, nephews, cousins and friends.  He was predeceased by infant daughter, Kathy in 1959 as well as his parents; seven brothers; and three sisters.

Adam grew up with a large, extended family nearby where they celebrated all special occasions with aunts, uncles and cousins.  The love of family gatherings is something he has passed onto his children and grandchildren.  He went to Stoney Ridge School and was baptized and confirmed at St. Paul’s Lutheran Church in the Serath-Elbourne district of Saskatchewan.

As a boy Adam loved being outdoors with the farm animals, especially the horses.  He spent time trapping, hunting and fishing.  As a young man he worked hard but also found time to enjoy playing fastball, hanging at the pool hall, going to movies and dances and later became a curler and a golfer.  Throughout his life, every visit with family and friends included card games.

In 1946 his family moved to the farm one mile west of Strasbourg.  In October of 1958 Adam married the love of his life, Linda (Frischke).  They lived and worked in Regina until the spring of 1959, when they moved to the farm at Strasbourg.   Adam and Linda bought the farm from his parents and this is where they raised their five children.

Those were very busy and happy years and Adam was involved in all the sports (hockey, ball, curling) and other activities that their kids were involved with.  In 1965 they bought a station wagon and with curtains and mattresses it became a “camper” and they went on many adventures; across western Canada and into the United States, including Yellowstone and southern California where Adam’s sister and her family lived.

Adam spent many hours volunteering in the community, in the Lions Club and the church, as well as helping out friends and neighbours.   He also enjoyed many years working for his friend Rinehold Hubick at farm auction sales.

In 1980, after struggling financially, they sold their farm land and kept the yard as an acreage.  In 1984 Adam started his second career when they bought a small hunting and fishing lodge in the Porcupine Hills on the Saskatchewan / Manitoba border at Townsend Lake.  The lodge had not been used since a large forest fire had swept through the area in 1980. There was lots of hard work and building ahead of them.  Moose Range Lodge became a favorite destination for all of their families and friends and they were blessed to make many new friends in the area.  In 1998 they sold the lodge and retired to Strasbourg, for a short time.

In 2006, Adam decided he still wanted “something to do” so they applied for the job of managing the Rosebud Valley Campground in Didsbury, AB and at the age of 82, in March of 2007, they moved to Alberta and he started his new job.

Adam overcame many health problems and several accidents in his lifetime.  He was a thirty year prostate cancer survivor and a ten year cardiac arrest survivor.  During the past two years there had been many hospital stays and in October of 2019, after several weeks in the hospital and a diagnosis of “end stage COPD and heart disease” Adam was able to come home for “in-home palliative care”.

Adam was so grateful for the wonderful Home Care team that provided support for himself and Linda and very thankful to be at home when the Covid pandemic was announced, rather than in long-term care.

In lieu of flowers or gifts, donations in Adam’s name may be made to Canadian Lutheran World Relief, 302 – 393 Portage Avenue, Winnipeg, MB, R3B 3H6, www.clwr.org.